Under the Radar: Stereotyping Indigenous Culture for Theme

There is a huge glaring gap in the conversation about representation and co-option of culture in the board gaming hobby. I hear a lot about the representation of black, latino, and asian peoples, but I rarely hear about co-opting, stereotyping, and tokenizing of indigenous culture to use as board game themes. To me, it seems so casual, even natural that these games keep popping up without anyone to criticize of keep them in check. I find it astounding we call for authentic representation in gaming and overall, ignore almost any conversation about this. I have seen a handful of games using indigenous peoples as a theme or in a theme and I want to talk about three of them today. They range from outright, blatantly offensive to more subtle. All are rooted in the power and privilege of racism and colonialism

The first is an older card game from 2006 called Pow Wow or Coyote. This game is a variant on Liar’s Dice where players cannot see their own card but must gamble, bluff, and deduce what it might be in order to win. I have seen ‘poker’ variants like this as well and I admit, they work well mechanically and provide a solid game. However, I cannot ignore the terrible theme pasted on to this game and the fact that players put the feather shaped cards on their forehead. The publisher could have easily picked a different theme, still using a similar mechanic (maybe NOT putting cards on foreheads), placing cards in a stand facing outwards or something similar. It shocks me to say that Pow Wow/Coyote has shown up recently in board game media and continues to be supported positively! I cannot speak for others, but I feel uncomfortable simply hearing about this game and that people in our hobby enjoy it without batting an eye at the theme. I honestly do not know if it is a lack of awareness, blatant ignorance, or being okay with putting on a culture in order to play a game. 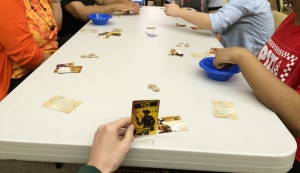 The second game I want to talk about is Bang! The Dice Game: A wild west shoot ’em up social deduction game. In this popular dice game, players take control of different people in this wild west town an have a secret affiliation. There is one sheriff and a couple of deputies on one side and a handful of rebels on the other. In the middle is the renegade, who wants both sides to perish. Seems like a standard wild west theme on the surface but there is one mechanic in the game that causes me to say… Why?! Players roll dice on their turn (like in Yahtzee) and decide what dice they want to keep and which ones they want to reroll. One the dice, there are opportunities to shoot people, to heal, and… arrows. When players roll arrows they must take an arrow token from a shared supply. Once all the arrows are gone, the ‘Indians attack’ (I am not kidding you, this is what it says in the rule book) and damage everyone who has arrow tokens.

I like Bang! The Dice Game AND I think the arrow mechanic is a good mechanic to have in the game. It allows players to push their luck when rerolling dice, knowing they have a chance to cause damage to themselves. However, there must have been a better thematic way to implement it. The new re-theming of the game takes on The Walking Dead intellectual property. Instead of arrows, players take walker bites. Mechanically it is the same. Thematically it works. Culturally we are not mocking, stereotyping, or vilifying a community. If someone posts “all zombie lives matter” … I have no words for you. 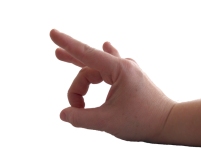 The last game is the new expansion to Flick ’em Up – a wild west themed dexterity game all about flicking game pieces in different scenarios (e.g., bank robberies, shoot outs, duels). The wild west / cowboys theme is fine I guess. And the first expansion added new mechanics while still keeping the theme just cowboys. When the latest expansion was announced, I was very disappointed: Flick ’em Up Red Rock Tomahawk. As you probably can guess this adds native peoples into the mix, creating that classic cowboys and Indians fantasy that White America loves. From briefly reading the description (because I probably will never ever play this game), in the new scenarios, players will not just be flicking bullets, but arrows and tomahawks as well. To my knowledge, the developers / designers / publisher did not have any native peoples working on this project and due to the stereotypical portrayal in the art, I would not be surprised if this was not even thought of.

There is a very short thread on Board Game Geek (https://www.boardgamegeek.com/thread/1560538/obligatory-cultural-sensitivity-thread) about this where the original poster asked, if Pretzel Games, the publisher, worked with any indigenous peoples while developing the game. A fair question in my opinion. If you read through the thread, a couple of the responses are “it’s just a game and it should be fun” or “if this offends you, pass it up,” often making a mockery of the call for cultural sensitivity and value. This response if frequent when people of color and other marginalized folks call out game themes (or anything really) that further marginalize and oppress communities. I also really dislike how the thread is titled obligatory. It makes social justice and equity conversations in board gaming seem cheap… “Oh, here we go again with this race and culture thing.” If you do read the thread, know there is a lot of privilege exposed with potential triggering comments.

e wild west never resonated with me like it does with others. I see many video and podcast reviewers get excited about what they call an underused theme. Even past the problems I have with the theme, when I was a child, I never found it compelling. I think one of the main reasons is because I saw zero Asian Pacific Islander (API) people in western shows and movies. Besides Jackie Chan in Shanghai Noon (even in that he was just an Asian sidekick…), I saw a bunch of White guys have shootouts, riding horses, drinking, smoking, gambling, exploring lands, and fighting outlaws. With no representation, I had no interest. I do not necessarily avoid the western theme, but I do not go seeking it out either.

The  wild west theme has it’s own issues in addition to it’s portrayal of indigenous peoples. It’s a slippery slope because of the United States’ past time of ‘Cowboys and Indians’ and the historical context of power and oppression it carries. So I started thinking about why is this even a popular notion in 2016?! The wild west them represents a White hyper-masculine fantasy of adventure and conquering an ‘uninhabited and untamed’ land. And this fantasy is fueled by the power and privilege they hold: the wild west and everything in it is theirs. In the United States, we are taught a history where those who explored the untamed west were heroes, vilifying the native peoples already occupying the land. If not portrayed as villains, the native peoples are often portrayed as helpers. There are a couple of games I can think of of the top of my head that stereotypes indigenous people in that way, but that will be for another post.

I am not saying you never play games with a wild west theme. What I am saying is educate yourself on the historical context the game is set in and be aware of the portrayal of indigenous people if represented in the game. If we are truly committed to equity and inclusion in board gaming, we must do something about our representation, both in our games and as gamers in our gaming spaces. Ideally, we could have very well-designed, well-themed games, featuring authentic indigenous characters designed by indigenous game designers. Until we work up to that point, we must be comfortable calling out and criticizing games misrepresenting marginalized people.

3 thoughts on “Under the Radar: Stereotyping Indigenous Culture for Theme”