//
you're reading...
#DiverseBGBloggers, blogging, board games, card games, dice game, under the radar 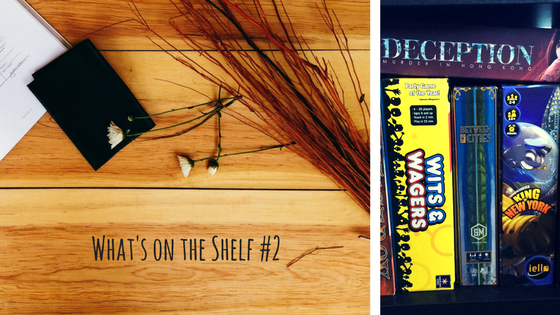 The second installment of What’s on the Shelf! This part of my board game shelf is the bottom right corner. This is where I keep most of my medium box games and a good amount of my games that can play 5+ players. While I may not always look at the bottom shelf, these games are in my collection for great reasons. Enjoy!

Deception is the game on the top of the other boxes. This is one of those social deduction game where players are investigators trying to solve a murder. One of the so called investigators is the murderer, trying to throw everyone else off the scent. Each player has four cards representing potential murder weapons and four evidence cards in front of them. At the beginning of the game, the murderer picks one of their own weapons and pieces of evidence. If the investigators figure out that specific weapon and evidence, they win! I think this game is clever because of the clue giving mechanisms. One play plays the forensic scientist and gives clues about the murder weapon and evidence… but they are restricted by set categories such as “Time of Day” the murder took place. This pushes the group to think creatively to make connections. You can also throw in other roles (Witness, accomplice) to spice up the game. Oh, and it was designed by an API designer.

This was one of the first Kickstarters I backed after watching a review of the game. Besides loving the beautiful artwork, I was intrigued by the pyramid of power mechanism with the card play. In truth, this game has no theme. Players are bidding different color gems in order to recruit different people into their pyramid of power. Depending on what level they place them on, results in what reward the player gets back. Players are simultaneously trying to create a system to get gems of different colors while also trying to get victory points on the cards. This can be a hard balance and takes a couple of plays to understand how scoring works. I am happy I backed this game and it’s one I hope to bring out more this year.

Do you like trivia games?! Do you hate trivia games because there is always someone who happens to know all those absurd facts and always wins? Well, in either case, this is the game for you. I would describe this as a trivia game where you do not need to know any of the answers to win. After everyone submits their answers, players bid on what answers they think are the closest without going over! The player with the most money at the end of the game wins. You may know nothing about any of the questions, but still win because you know who does know the answers. I like this game because it’s tons of fun and plays really fast.

Another one of the first Kickstarters I backed. I played the prototype a lot with one of my local game group. The organizer really loves Stonemaier Games and was play testing Between Two Cities before the Kickstarter. I enjoyed the fast-paced tile laying and city building elements even though I thought and still think the scoring is a bit wonky. You are building two cities – one on your right and one on your left. Each cities will have different elements (parks, entertainment, offices, houses, factories, etc.) that will score points in various ways. At the end of the game, you score the lower value of the two cities you help build. In essence, you are trying to build your cities evenly (in points) to have the highest lower valued city. I keep the game because it is a fast drafting game and it can play up to 7 players. The two player and the solo variants are not bad as well.

I had the option of getting King of Tokyo or King of New York. While King of Tokyo is the more accessible game out of the two, I felt King of New York would fit into my collection better. While I love King of New York, it doesn’t get to the table as nearly as much as I want. This game is all about giant monsters fighting each other while in New York City, trying to control the different burrows of NY and ultimately being the last monster standing! I LOVE the theme of this game and love all the monsters (especially Captain Fish, shown in the picture). This is a ‘Yahtzee’ style game where players roll and refill dice before they resolve their actions. I also have the new power up expansion (which adds a freaking shark monster!) and special ability cards to make each monster unique. While I like this game a lot, I am still considering getting King of Tokyo, which simplifies the game a bit, and putting it in the same box.

The final game for this episode’s What’s on the Shelf is Monarch a self-published game from designer Mary Flanagan. In this game, players are sisters vying to be the next monarch over the kingdom. This is an interesting set collection game as the sisters harvest food, tax the people, and recruit different nobles to their courts in order to gain influence points. I honestly think this game is very underrated and the simplicity is what makes the game great. The design is also set up (in my mind) for a ton of expansion content. I like how the sisters must work together at some points or do an action which may help a sister. The one thing that frustrates me about the game are some of the random events in the deck. But I can look past that as this is a 30-45 minute game! There is also a two player variant which works well.

There you have it! Another episode of What’s on the Shelf complete. I hope you saw a game you find interesting. And as always if you have any questions or comments, please leave them below.