Gen Con is next week, the largest board gaming convention in the United States, in Indianapolis, Indiana. Many games will be released and sold for the first time there. Unfortunately, due to many circumstances, I am unable to attend this year but I am in tuned to what games are coming out and I am pretty excited for a handful of them. I have put together my top ten games I am excited for at Gen Con.

From designer Chris Cieslik and his company Asmadi Games comes a cooperative card dungeon delve for 1-2 players out of the box. More players can join in on the fun with more copies of the game. The main reason why I put this on the list is because all of the characters are realistically portrayed women and two of the characters are women of color. I am always happy to see and support games with a diverse representation of identities without tokenizing, stereotyping, or misrepresenting.  Can your team of dungeon divers survive all of the monsters, taps, and the final boss to survive the dungeon and go down in history as a legend?!

A crossover of my two favorite hobbies!!! In this fresh new ‘party-style’ game from designer Matthew Moore and publisher Gamewright Games,  players literally bring their own book with them to the game! Similar to the now classic party game Apples to Apples, one player each round will be the judge and flip over a category card. This might say something like, “Your new company’s slogan.” Then each player then searches through their book in order to find a phrase that they think best fits into the category. The judge picks the best answer in their opinion awarding the player points. I can see this being a struggle for some folks I play games with; however, I think this is a brilliant and unique idea that most bookworms will love! This should not be too expensive and I may be looking to acquire a copy of this game… just simply for the fact IT INCLUDES ALL OF MY WONDERFUL BOOKS! 🙂

9. Welcome Back to the Dungeon

Welcome to the Dungeon is a push-your-luck game from designer Masato Uesugi and publisher IELLO Games. I own this original and really like the simple and fun gameplay. Welcome Back to the Dungeon is an expansion / standalone sequel by one of my favorite designers… Antoine Bauza! On a player’s turn, they must decide whether to draw a new monster or pass. If they draw a monster, they must add it to the dungeon or take away a piece of the current adventurers equipment. Last person in the round becomes the adventurer and braves the dungeon! From what I gather, this expansion adds four new characters that can be played with, with entirely new equipment set and special abilities. I do not think there will be any added monsters, but I am excited to see the new mechanics. This will give Welcome to the Dungeon a lot more replayablity and it will stay in my collection for a while. 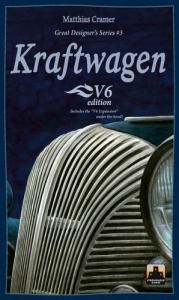 Kraftwagen is a strategic game about making cars that came out in 2015 from designer Matthias Cramer. The v6 Edition is a new English-based printing from publisher Stronghold Games, which will include the base game and added technology tiles to reflect v6 technology. The game takes inspiration off of one of my favorite Cramer games: Glen More. The mechanic is a “one way street” action selection rondel. Okay, that sounds a little complicated… All of the actions for the game are placed in a circle and each player has a pawn in their color and on their turn (last in line) they can move and take any action in front of them. They could choose to jump far ahead if they really wanted an action; however, they may wait a while for their turn as other players slowly make their way through the action wheel. This mechanic is very clever, having the player last in line on the action wheel be the active player. All of this allows for meaningful choices for action selection and a very tense game. I played the first edition last year and really enjoyed the game. I am looking forward to the new printing and new technologies included!

Mike Elliot has proven he is a prolific designer when it comes to card games. Final Touch is a smaller card game coming from Space Cowboys, focusing on hand management and maybe some take-that gameplay. I honestly do not know much about this game but both the designer and the publisher have a good reputation in my opinion. I really like the concept and theme of the game. Players are all artists trying to put the final touches on their pieces of art to sell. The first player to successfully put the final touches on a certain amount of paintings is the winner. Sounds like there will be some clever card play and hand management. I really enjoy smaller card games and because of the relatively low price point (hopefully) I may pick this up to try it out!

Wow. Portal Games has always been a favorite publisher of mine but they are stepping up their game! New from Grant Rodiek, Michal Oracz, and Michal Walczac is the much recently hyped Cry Havoc. Okay, I usually do not get swept up in the usual “Euro thrash” hype… and I almost exclusively do not play games with miniature figures,  but Portal Games and Cry Havoc has my attention here. Cry Havoc looks like a very neat area control game with a hand management component and asymmetrical player powers. Kind of a Small World+ game. The battles ad conflicts aren’t as simple as deterministic combat but simple enough to have fast turns throughout the game. At the very least, I have to play this game and see what it is about. Who know, maybe Cry Havoc will be my first game I own with a box full of plastic minis.

5. Smash Up: Cease and Desist 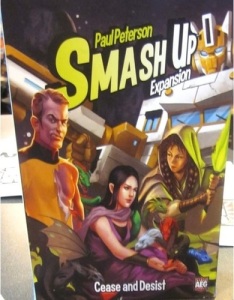 Smash Up. What can I say? This is one of my favorite card games and I rarely turn down a play. Paul Peterson and AEG come back with the next expansion Cease and Desist. This new expansion comes with four new factions all parodying a popular television or  movie franchise: Astroknights (Star Wars), Changerbots (Transformers), Star Roamers (Star Trek), and Ignobles (Game of Thrones). In true Smash Up humor, the cards, actions, and bases are aptly names with fantastic artwork. More Smash Up? Of course I am definitely getting this one to add to my master collection. Every time I think AEG must be done supporting this game, they come back with another fun and fresh release. I am looking forward to this one and whatever they have planned next!

Pretzel games has a mission to create games where players can play their games while holding pretzels in one hand. Their second release comes from designers Jay Cormier and Sen-Foong Lim. Junk Art is a dexterity game where players are stacking colorful wooden weirdly shaped pieces to complete different objectives. From what I hear, there are many different styles of games in the box, depending on what your group wants. I low key like dexterity games (I own two sets of Suspend) and would love to add this one to the collection. No matter what age of players we have at game night, everyone enjoys a fun stacking game!

Antoine Bauza is back with more drafting!! I love Antoine Bauza’s designs and after the huge success of the drafting game 7 Wonders, he and publisher IELLO are releasing what is said to be a lighter drafting game, Oceanos. In Oceanos, players are exploring the depths of the ocean trying to collect treasure and see rare ocean life. This looks like a perfect family-style game, one that has simple rules, but some strategy and replayability. I definitely have room in my collection for a game like this. We are always looking for games we can play with friends and family who might be be in the hobby gaming community. The artwork looks gorgeous and overall, a very nice looking package.

Most folks I know are anticipating Capstone Games’ other title they are releasing at Gen Con: Arkwright. While I am excited about that game (probably in my top 15), I am way more excited about Haspelknecht, due to the look and the theme. Designer Thomas Spitzer brings us the FIRST game in the Coal Trilogy. In this game, players take on the role of early farmers with the opportunity of exploring the nearby land for coal. The mechanisms in the game seem to be a combination of worker placement and action selection. Players must balance digging deeper for coal, expanding their farm, and being aware at the increasing level of water in their pits. Haspelknecht looks like a very deep strategy game, a genre I really enjoy. I hope to get a play of this one soon… I definitely need to play it before I consider purchasing to add it to my collection! 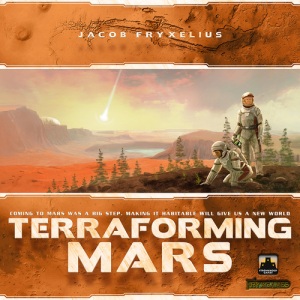 Annnnnnnd my number one game I am excited for at Gen Con is Terraforming Mars for designer Jacob Fryxelius and publisher Stronghold Games. I cannot fully articulate how excited I get for themes about space and terraforming planets. This is one of the first games of the year to be set on Mars and it is one I will definitely be playing (maybe this is a save up and treat myself type of game). The gameplay looks to be a card management, tile placement, and maybe a bit of a race. In the game, players take on the role of corporations aimed at terraforming Mars the fastest / the best. I LOVE the look of the game. Everything here is pulling me in from the theme to the art to the mechanisms. I think I will really enjoy this game and if I do, it is almost a must add to the collection.

« Book Review: The Summer That Melted Everything by Tiffany McDaniel
The Pokémon Go Book Tag! »

2 thoughts on “Gen Con Most Anticipated”