Book Review: House of Many Gods by Kiana Davenport 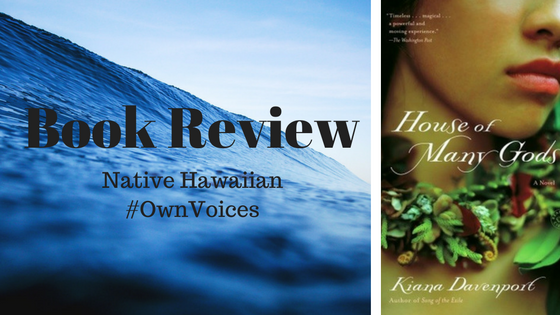 House of Many Gods by Kiana Davenport was the only book by a Native Hawaiian author I found at my local library. My library did carry a selection of the “top books about or set in Hawaii,” but unfortunately those books are written by White authors or non-Native Hawaiian authors born or living in Hawaii. Kiana Davenport is biracial, Native Hawaiian and White. Her father came to the islands when he was stationed at Pearl Harbor and met Kiana’s mother. As a biracial reader and writer, I look forward to reading biracial and multiracial authors and how their characters may have to navigate two different cultures or how they are perceived in different communities. In addition, this month I aim to feature Native Hawaiian authors and their works in an efforts for more visibility.

Kiana Davenport is able to weave many themes within House of Many Gods. While the book is described as a love story, I honestly did not think or experience it as a romantic love story the way I would expect to… And that was fantastic for me as a reader. The story starts out following Ana, abandoned by her mother Anahola and raised by extended family on the Wai’anae coast, which is west of Honolulu. Ana is a particularly driven and intelligent person and goes to school to ultimately become a physician. While working on the island of Kaua’i, Ana meets Nikolai, a Russian documentary filmmaker who travels the world filming issues of environmental justice. A love story begins between two very stubborn and headstrong people from vastly different cultures. The book focuses almost exclusively on Ana’s life, from a young child all the way through adulthood.

After finishing the novel, I thought the main themes were family, health and ability, and environmental justice, more so than romance. The first comes out immediately as we start reading in the first few chapters, learning about Ana’s family and a little about Anahola in living in California. The narrative of family is powerful because the absence of Anahola is formative in Ana’s identity throughout the story. It impacts how she relates to her extended family, her friends, and her romantic partners. Health and ability tied in directly to Ana’s choice in study and profession – entering the medical field and eventually starting a residency to become a doctor. However, there is a twist when Ana has medical complications when she is a resident in the emergency room. Her struggle through her medical issues were also powerful and tied directly to the themes of family and friends. Both of these themes I would love to talk about more, but I feel like I would be spoiling the book for all of you. I will let you discover this for yourselves.

Environmental justice was a huge backdrop for the story. We are first introduced to the struggle of Native Hawaiian communities against the government when Lopaka, Ana’s favorite cousin and a veteran, starts talking about the bomb and missile tests happening in the valley near the Wai’anae coast. Lopaka organizes protests against these military facilities and when Nikolai comes to Hawaii, Lopaka brings him into the fold as someone who could document the atrocities on the Wai’anae coast. I appreciate the subtle and direct messages about modern day colonialism of sacred Native Hawaiian land in the name of security and defense by the United States government. Remembering that Hawaii was a strategic military base and port, it is not surprising about the further taking of land from Native Peoples to test bombs and missiles.

When Nikolai was first introduced and made his way to Hawaii, I was afraid his story line would be a White Savior narrative. Either his part in the struggle for environmental justice or the love story between him and Ana would result in a perfectly happy ending. And the credit would go to Nikolai. I was pleasantly surprised that Nikolai, even with his own chapters to described his history in Russia, remained a minor character and did not sweep in at the end to save the  day. In fact, he respected Ana and simply listened to what she wanted… and left Hawaii. Without going into too many spoilers for this book, I found their relationship at the end of the book to be less about saving one person or another but saving each other from all of the painful experiences of their individual lives. This allowed separation from the White Savior narrative and turned it into one of common understanding and common goals.

The culture infused in this novel is absolutely astounding. First of all, the book is filled with many Hawaiian words (which are italicized in this case and I believe there was a glossary in the back to help non-Native Hawaiian speaking people) to better describe situations, traditions, food, feelings, and beliefs better than any English word could. I am not a big proponent in italicizing non-English words, but I do not mind if an #OwnVoices author chooses to for their own reasons. The glossary is helpful; however, I enjoyed feeling the words in the context of the passage. I may not know what the words mean exactly, but the words immersed me in the story. The number of traditions included also added to the experience. From coming of age traditions to pregnancy traditions, the authentic #OwnVoices writing by Kian Davenport made House of Many Gods unapologetically Hawaiian, away from the paradise and resort narrative.

Overall, I really enjoyed House of Many Gods by Kiana Davenport. This is one of those books where I felt like I knew Ana from a child all the way to and through adulthood. The writing in the book has a way at progressing the characters little by little so when I stopped to finally reflect, I realized how much these characters actually changed. It was similar to watching a TV show over ten seasons and looking back at the characters in season one and being awestruck at the development and change in them. Brilliant writing, seriously, to be able to achieve this feeling. If you can find a copy, I would recommend you pick it up!

11 thoughts on “Book Review: House of Many Gods by Kiana Davenport”