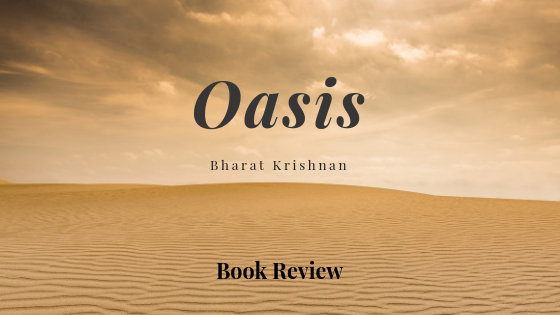 I received a free e-copy of this book in exchange for my open and honest review.

I find it difficult to write about fantasy novels because often, many of the same tropes are used – the oppressive king/dictator, the band of spunky rebels, forbidden magic, etc. And because many of these tropes are used often, it unfortunately impacts how I receive new novels in the genre. I am not sure if this is fair and the truth of our lived-experiences is our lens is framed by what we have experienced in the past. When new authors publish a book, whether with a publishing house or independently, I am looking for the aspects of the story that makes it unique and engaging.

Oasis by Bharat Krishnan is a fantasy novel that aims to mix an epic journey with Asian/API mythologies. Below is a brief description of the book from the author:

Once, there was a truce. Desperaux controlled the west with magic, and Desire claimed the east with steel and science.

But now magic has disappeared, and the world has changed.

The kingdom of Desire will stop at nothing to maintain the new world order. On Juno’s wedding day, their Mengery soldiers came marching through the Nine desert to rip his world apart. Now he journeys east with his adopted brother, Trey, in search of revenge after the death of his family. Along the way, the two face bandits and the magical creatures of the Nine. When the two finally reach Desire, they’ll face something even deadlier – their own fears and ambitions.

This is a tale of brotherhood, a revenge story that will remind you that everything has a cost – a cost that will be paid to Desire, and to the inner demons that govern us all.

Unfortunately, Oasis was a bit hit or miss for me, often leaning in the miss direction for periods of time. When I finished the novel, I could not put my finger on one aspect and I took some time to think through my experience with Oasis. I found I could not necessarily identity one common thread of dislike and found it easier to identify certain aspects I enjoyed and certain aspects I did not like so much.

I want to give a disclaimer with my rating – while I was not head over heals for Oasis, I do think there is merit in this novel. I would recommend you give Oasis a look because it is very well possible you will connect more with the story and characters than I did.

Check out Oasis on Goodreads.