My Only Anticipated Game from Essen 2018

Yes, I know. The title is a bit dramatic, but you have no idea how long I have been trying to get a copy of this game!

Every year in Essen, Germany in October, there is a board game fair where close to one thousand games are released. This is the time of year when (everybody) releases their most anticipated game releases… and there are SO many games to browse through. So like everyone else, I dove into the list to see what might be released. Essen is always a mixed bag for me – there are those games that seem interesting and possibly unique. But the majority of games in my opinion are more of the same with themes or mechanics that do not interest me. One game stuck out to me and actually got me really excited at the prospect of owning and playing this game. The game is Foppen from designer Friedemann Friese and published by 2F-Spiele. It originally came out in 1995 and I first played it at one of my old game groups – my friend had an original copy and he enjoys obscure card games, similar to me! Well, it is getting a reprint this year and releasing at Essen! 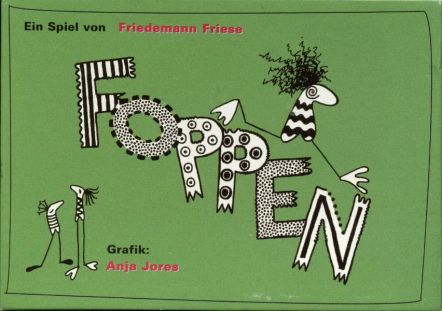 First, let’s take a look at the lovely 1995 artwork on the front of the box. In my opinion, the art definitely screams the 90s but I kind of like it… There is a charm I associate with this box and this type of art. I guess it reminds my of a simpler time, one of Dr. Seuss rhymes and illustrations.. Below is the reprinted version, Fool! also from 2F-Spiele and (in the United States) Stronghold games. The art looks more modern and I find the characters still charming. The art is definitely in the same vein of the other smaller box games that 2F-Spiele releases (see Flee for an example). I looking forward to seeing the card art and the art of the foppen disk. I am not big on the English title and would rather have it still as Foppen – however, I have been searching for this game for a while now, I cannot complain!

Foppen is a trick-taking game where players are trying to get rid of all the cards in their hand first. You do not have to win every trick or even the majority of tricks – the key is never playing the lowest card in a trick. If you play the lowest card, you must take the Foppen token. During the next trick, instead of playing a card from your hand, you play the Foppen token, giving it to the next player who plays a low card. Foppen is in the same vein as Friese’s other trick-taking game, Five Cucumbers, in it’s simple, clean mechanics and goals. In Five Cucumbers, all you have to do is not take the last trick. In my opinion the simplistic approach to trick taking really puts the emphasis on hand management – like a classic trick taking game such as Hearts. Foppen feels like a classic card game and that is what I love about it. There are no special powers, complex rules to remember, or try to take trick taking to a place overwrought by mechanics and theme.

I am a little astounded that Foppen is getting a reprint because it is such an odd little card game but for whatever the reason it is, I am grateful. Am I excited for other titles at Essen? Sure, my title to my post is a little dramatic and a little sarcastic. But I do think smaller games at Essen are overlooked for those big productions and I think you should give this small card game a chance.

One thought on “My Only Anticipated Game from Essen 2018”