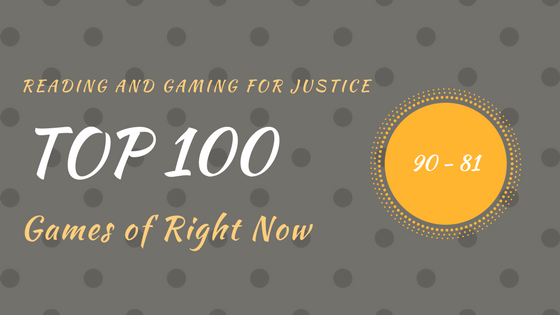 Welcome back to my Top 100 games of right now! Like I mentioned in my introduction post, this list shifts around constantly. While I am not changing my list as I am posting… a couple of games I played at a local convention over the past weekend definitely have a shot to get in… such as Azul, Seikatsu, and Yokohama. Anyways, back to the list!

This is one of the first abstract games I played when I got back into the hobby. My mom was actually the one who bought it (she is way into board game too) without knowing really anything about the game. We broke it open and discovered a wonderful, thinky, and exceptionally clever two-player abstract game. The goal of the game is to surround your opponent’s queen bee and you do this by moving other bugs and critters. Each different bug moves differently around the free form ‘board’ creating and interesting puzzle.

While the designer of Citadels and I will always disagree about representation and inclusion in board games, he has designed some pretty fun games. One of the best known Faidutti games is Citadels which came out in 2000 and was reprinted very recently. In this game, players are trying to build different locations and they do this by selecting roles each round. Each role is then called out in a particular order and if a player picked the role called out, they get to do an associated action and also have an opportunity to build if they have enough money. As far as boiling down role selection, I think Citadels is one of the best.

Deus is another one of those games which was decently popular about three years ago then disappeared… even the new expansion did not help to revive this game. At it’s heart, Deus is a card driven, engine building civilization game. Each time players play certain types of cards, it triggers the entire chain of that type. The different types of cards allow players to expand, engage in battle, score points, produce goods, etc. But putting the theme aside, it is the engine that a player can build that really attracts me to this game. Deus is clever and rewards a deep exploration of the various strategies. 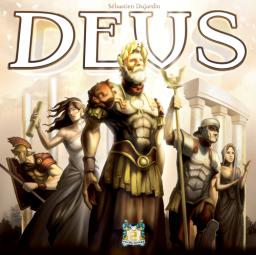 Spyfall revolutionized social deduction games for me. In this short and well-paced game, players are all at the same location determined secretly by a card… but one player receives a card that only says ‘Spy’ on it. One player starts and asks any player a question – it can be any question. The player who was asked must answer the question then they get to ask another player a question. The ‘Spy’ is trying to figure out where they are and everyone else is trying to find the spy. The brilliant part about this game is that the questions and answers need to signal that you know the location but vague enough that the spy cannot figure it out. Or if you are the spy, blend in.

I know a lot of people have cooled on Patchwork but in my opinion it is the slickest polyomino game out there. In creating one of his large farming games (A Feast for Odin), Uwe Rosenberg distilled one of the mechanisms and created the much light but still mentally challenging Patchwork. Players are attempting to complete their personal quilt (9 x 9) using different shaped tiles. Tiles will not only cover surface area for the quilt but will provide income along the way. I think this game is excellent because of the time track. Each piece costs a certain number of buttons (currency) and time. Time propels you towards the end of the game – the person farthest back on the time track gets to take a turn. So a player could end up taking multiple turns in a row. I do not think I will ever turn down a game of Patchwork.

Nippon is a game about the industrial revolution in Japan – but really it is a worker placement game with an area majority scoring mechanism. The clever part of this game is the different types of workers represented by different colored meeples. Players take turns taking meeples from action spaces but have to pay more for the workers at the end of a round if there are multiple colors of workers (3 per different color worker). In doing these actions, players are investing in different industries, shipping goods, and expanding their influence.I would say the resource management piece is nothing new but the action selection is very unique and compelling. 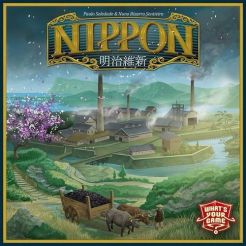 84. Valley of the Kings designed by Tom Cleaver

Deckbuilding has been a middle of the road mechanism for me in board gaming. It provides an interesting puzzle but after a while it comes down to deck stacking with certain cards to chain together abilities, purchasing powers, and ways to score points. Valley of the Kings was the first game I played that felt different in deckbuilding and more like deck management. All cards have the potential to score points but they do not score anything if the card is still in a player’s deck at the end of the game. The neat and clever mechanism in Valley of the Kings is deciding when to take out cards from your deck to score them, depriving you of their action on future turns. There is a lot of game in this small box.

I love hot peppers in real life and Scoville puts the players as pepper farmers cultivating the land, producing peppers, creating new types of peppers, selling those peppers, and making hot sauces for competitions! What a cool theme! What will keep me coming back to this game is the way players obtain resources and can create situations to get better resources. In the first half of a round, the active player can plant a pepper and then move their farmer to harvest peppers. The peppers the player receives is determined by the two peppers the on either side of where the farmer stops. In the beginning of the game there are only basic peppers (red, yellow, blue) but as the game progresses players will obtain better peppers and eventually, hopefully the ghost pepper!

I am a huge fan of card driven games and two player head to head card driven games really hit a sweet spot for me. High Treason fits perfectly and has a super unique theme. One player takes on the role of the prosecution in a court trial and the other player takes on the role of the defense. This is a historically accurate game depicting the real trial of Louis Riel. This is a piece in Canadian history regarding the Métis people, a First Nation in Canada. Riel was tried for treason for holding a resistance to the Canadian government – there is a lot more to the story about Riel’s life, his political leadership, and what he did in establishing the province of Manitoba. A neat game with a lot of history to explore.

81. For Sale designed by Stefan Dorra

For Sale is a quick an interesting auction game where players first bid on different properties with different number values and then try to sell their properties for the most money. The first part of the game is an auction. Number of properties equal to the number of players are turned over and the bidding starts. When a player passes in the auction, they take the lowest property card available and receives half their bid back. The last person in the auction gets the most valuable card but pays their entire bid. The second part of the game is selling properties. This time, money cards equal to the number of players are flipped over and each play picks one property card to play simultaneously. The highest property takes the highest money card. I think For Sale has a pretty unique feel to it… almost like Biblios. 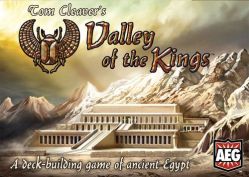 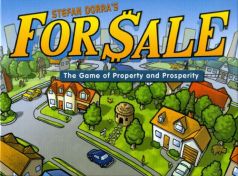