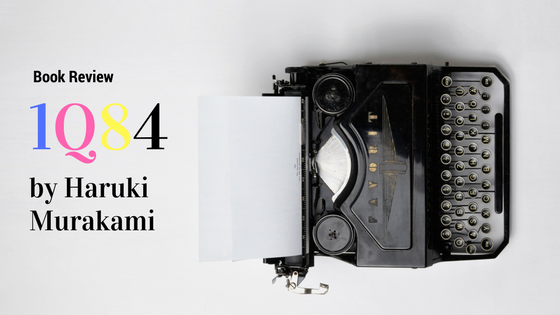 When I set to embark on this journey in the beginning of April, I had no idea where this story would take me. I have read a handful a Murakami novels and I was familiar with his abstract, explicit, and almost dream-like way of presenting his stories. He uses many details and focuses heavily on character development, drawing out the nuanced personalities and histories of the characters and then transforming them throughout the many pages of the novel. It is impossible to talk about 1Q84 without giving away minor spoilers and I will do my best to gloss over the details. If you are thinking about picking up this large book, proceed with caution – you do not know what you are getting yourself into.

1Q84 follows two main characters, Tengo and Aomame, for the entire 1200 pages, with alternating chapters. Their stories grow closer and more complex as the novel goes on, exploring their deep connection past and present. Tengo works at a cram school teaching math three times and week and writes in his spare time. Through his writing connections, he stumbles upon a compelling short novel by a seventeen year old girl named Fuka-Eri. The novel, while compelling, has no semblance of a writing style and Tengo’s editor Komatsu asks Tengo to rewrite the novel. Komatsu believes this novel will be a best seller and make his company a lot of money. With the green light from Fuka-Eri, Tengo undertakes the task of rewriting. However, little does he know that process will pull him into an alternate world, a town of cats, 1Q84. 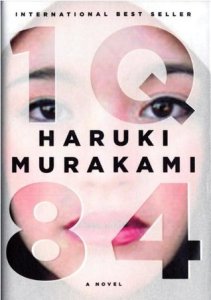 Aomame’s story starts off a bit differently. She is pulled into the world but goes on her own will… kind of. After getting out of a cab in the middle of a highway, Aomame proceeds down an emergency stairwell and ladder, leading her out of 1984 and into 1Q84. As a character, Aomame is very calm and collected. She works as a fitness instructor and has an extensive knowledge of muscles and nerves. Oh and she is also a contracted assassin to kill men who abuse their wives in the most precise and sneaky way. While Tengo is writing an publishing a novel which will, unbeknownst to him, expose a religious organization and their supernatural beings, Aomame is slowly working herself closer and closer to that same religious organization. For both characters, I felt a very slow development as individuals as well as together as a pair (even though they are apart). Each independent experience has an unintended and unknown consequence for the other. I found those small consequences and sometimes large consequences compelled me to read more and more, yearning to know the outcome of the story. Many authors do this style of writing well, but I truly believe Murakami is a master.

I want to comment on Fuka-Eri a bit. She is describe as an odd teen with a distinct, no-nonsense speaking style – for example, she never uses question marks (raising of the voice pitch) as a part of her speech. There is a lot in the book talking about Fuka-Eri, but I want to focus on sexuality. Murakami is well-known for writing explicit sex scenes and in the case of Fuka-Eri, he stays (mostly) away from sex. I believe Fuka-Eri identifies on the asexual (ace) spectrum. Her guardian, Professor Ebisuno, describes her as ‘transcending sexual attraction’ while other characters simply comment she is disinterested in sex or does not feel any sexual attraction. I think the representation is okay here. There is no one who attributes the lack of sexual attraction to an oddity or something that is weird (although they comment on how odd she is in general). The fact just is and no one tries to change that. Fuka-Eri does find her in a situation that leads to sex, but not because of sexual attraction or forcible assault. Still, I sometimes find it odd when and where Murakami uses sex in his stories.

The main thing I noticed with 1Q84 was the level of detail Murakami put into the creation of his alternate timeline or world. For both characters, it was not evident they left 1984 and crossed over into the Town of Cats, but the small details shifted. I was astounded that Murakami was able to thread these small details throughout the entire length of the novel, relying on these small changes to illustrate the subtle and powerful forces working in the world. It made me step back and think about the tiny details of my world I take for granted. If they shifted, would I notice? I have heard reviewers and folks call this a fantasy novel but I think this falls into the magical realism genre. 1Q84 is very realistic in terms of the world, the people, and even many of the actions the characters do. However, there are clear supernatural phenomenons that happen, such as the presence of the Little People, the premonition of Fuka-Eri and Leader, the creation and existence of air chrysalis, and of course the mere existence of the world 1Q84. But even then, the supernatural is well integrated into the ‘real word’ and as a reader, I felt it was believable.

Well, on that note, let’s talk about the Little People and Sakigake. Sakigake is the main antagonist organization in the novel. It started out as a farming commune but suddenly turned highly religious and considered by some to be a cult. The Little People are the ones driving Sakigake in what they do. They are the voices and the conscious of the religious organization and will use what they need to achieve their goals in 1Q84. This provides a backdrop as Tengo and Aomame traverse this new world separately, in parallel, with a common goal.

There are more questions posed than answered in 1Q84. For some, this may cause frustration. But I see it as the brilliance of an author writing contemporary magical realism. Murakami writes to stretch the imagination of the reader, focusing on themes such as love, family, belief, isolation, and accountability. In all honesty, 1Q84, the magical real world that mirrors our world was just a backdrop to pose large questions that we think about daily.

For those of you who enjoy Murakami’s work, I would highly recommend 1Q84 to you. If you are thinking about starting a Murakami novel, I would recommend you start with a shorter one such as Kafka on the Shore. If you did not enjoy a previous Murakami novel, this will not change your mind and is definitely not worth the commitment or effort. However, as a Murakami fan, this was a must read for me and one I really enjoyed. If you are thinking about picking up 1Q84, I do want to leave you with some trigger warnings. The book deals with child abuse, sexual assault, religious organizations and cults, and murder. Please proceed with caution and take care of yourself. Ultimately, this is one of the pinnacles of Murakami literature and for me, worth the investment.

« A Dualistic Approach to Pluralism
May 2017 Giveaway »