A Q&A with Claudie Arseneault, author of City of Strife 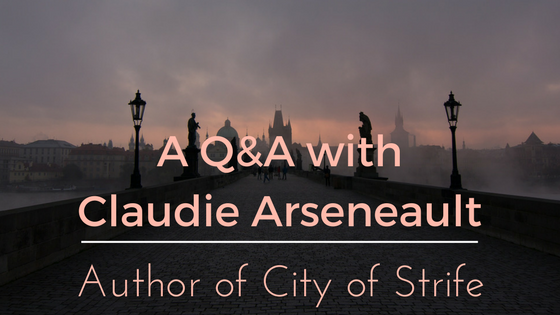 If you all have been following my blog, you know that City of Strife was one of my favorite books I read in 2016 (read my review here). I read an advanced copy and now at the end of this month, the book will finally be released! City of Strife is the first book in a series set in the city of Isandor. The book follows many different characters in this political fantasy, exploring relationships, family, power, and friendship. I am excited to share with you all a Q&A with the wonderful author, Claudie Arseneault, who gives great insight into writing fantasy, how she created the city of Isandor, and the intricate relationships between the characters.

What was the spark that ignited a passion for writing in the fantasy genre?

Like many others, it all started with the Lord of the Rings. Although, I suppose I had shown interest in fantasy-like stories (probably through videogames) before for my mom to decide buying the Fellowship of the Ring to a 9-year-old was a good idea. The movies weren’t out yet. In fact, I think they hadn’t even been announced. I still remember starting eagerly, powering through a prologue on hobbits… then another on tobacco… then another… and stopping. My 6th grade teacher was reading Harry Potter to us, and she was way too slow for kid me, so I switched. A month later I had devoured all four books already out, and turned my attention back to that other fantasy book. I flipped through the prologues until I saw one named after the Ring’s discovery, and since I knew that Ring was supposed to be important, I jumped in there instead. A year later, I had read the entire trilogy 13 times, including twice in English (French is my first language), and I was well hooked into the genre. My older brother handed me The Silver Stream, a Forgotten Realms book, and suddenly I had a huge setting with a gazillion stories to read.

What was your inspiration for creating the city of Isandor?

This little paragraph is a part of the Forgotten Realms Campaign Setting, D&D Third Edition, and the very beginning of this novel. I was browsing through with my sister (who did City of Strife’s cover!), looking for inspiration to start a campaign. Rereading it now, I’m surprised about how much of it still rings true! Merchants definitely build eccentric towers as a show of power, it’s absolutely the last navigable port of a major river, and thus an important trade crossroad, and “become great if it stopped squandering its energy on internal feuds” is a thing Diel actually says.

The setting obviously changed a lot since. First, I’m not a Forgotten Realms writer, so while I kept elements I liked (high magic, polytheism, the Red Wizards and Thay to some extent), I built my own world (and built it with inclusivity in mind).

Looking at my last two answers, I am from a very elves, dwarves, and orcs school of fantasy. I write other types too, but City of Strife is my universe to fully bask in my love for these tropes.

City of Strife puts a lot of emphasis on relationships between the many characters, centering friendship and family. What was your process developing the many relationships in the story?

Honestly, the friendship thing just… happened. Over a very long period (Larryn and Cal’s friendship has always existed, Branwen and Varden’s meeting is completely new).  It is without a doubt a mark of how important they are to me, that they evolved on their own to take a central place in the novel. Interestingly, however, it took me a long time to realise that’s where the heart of my story was. We are so conditioned to romance and action that I didn’t really see it until someone pointed it out (an aroace beta, no less!).

One thing that always interested me is unequal relationships. The ground isn’t always even between two people, and this can cause unexpected strains or pleasant surprise. It’s a fertile ground for rich storytelling and layered relationships. Yultes in particular combines very conflicting relationships to family (he abandoned his child and the mother because of classist ideas he struggles with now, but that are still ingrained enough to hamper his ability to grow out of them).

The triad between Larryn, Hasryan, and Cal (nicknamed The Halfies Trio in the novel) is also pretty interesting in that regard. Larryn and Hasryan are way more prompt to confide in each other because of how much they have in common, but Cal first glued them together and remains an essential part of the group.  It’s probably not a coincidence that they are, in order, Grey-Asexual, Demiromantic, and Aro-Ace — all three of them do not have a heteronormative approach to relationships. I really enjoyed pushing their dynamics in a new direction, straining and poking at it to see how it reacts to pressure, to new arrivals, to disappointments and great surprises.

In a mess of characters like this, you really have to 1) look at them one by one, and 2) go with the flow. If something clicks, run with it! Write the fun thing, then sit back and examine what it means to your story, where it could go, how it fits with the rest. I’ve been exploring the different relationships between most of Isandor’s characters for years, and in many ways, City of Strife is me diving headfirst into my favourite versions.

One aspect I noted was the vast diversity represented in the character cast. Can you tell us a little bit about writing diverse characters outside of an #ownvoices perspective?

You research and listen a lot, and if you know sensitivity readers who can help (or can afford to pay strangers), you definitely get them. Seriously, though, paying attention to the communities you want to represent is a must. They talk about tropes and microaggressions to avoid, they talk about what they’d like more/less of, they talk about what narratives should be left untouched by outsiders. This has led to a lot of deconstructing the narratives I was presenting, changing my framing, removing entire chunks of storylines, etc. Even now, entering the last copyedits into the novel, I am correcting word choices. There is a difficult balance to strike between representing everyone and staying in your lane, and I can only hope I managed it right.

I also try to avoid advertising based on identities that are not mine. Although I will readily say City of Strife is led by a LGBTQIAP+ crew, I try to avoid things like “one MC is a polyamorous bisexual elf!” If I ever do, it’ll be to immediately promote #ownvoices authors for these identities.

In short: listen a lot, question yourselves always, rewrite if you have the slightest doubt, promote others before yourself.

Which character in City of Strife resonates with you the most?

This is such a hard question, especially since many of what resonates develops later in the trilogy! I share bits and pieces with all of them. In many ways, Varden is a goal for me. Despite the monstrous amount of shit he has to deal with, he manages to remain kind to the right people, and from Book 2 and on, unforgiving to those who don’t deserve it. A lot of Hasryan’s relationship with Arathiel (it grows into a queerplatonic relationship) resonates too.

A very personal part of City of Strife is Nevian’s relentless studying, no matter the circumstances. I work hard. Every day, no matter how burned from Paying Work I am. I did the same during my studies, adding writing to full semesters and part-time job. This stubborn sitting to work under shitty circumstances is mine (sidenote here that I have fairly stellar health, and that while this “work every day” thing is possible for me, I am fully aware it’s not for great many disabled writers). I am also very prone to arguing the technicalities in an argument, and while Nevian is fairly more sex-repulsed than I am, his aceness resonates with me a lot too.

The longer I spend in twitter communities fighting for asexual and aromantic communities, the more Larryn’s relentless anger seems to emerge, too.

Who are some other ace and/or aro authors we should be paying attention to?

*rubs her hands with excitement*

First, I launched a collective of indie author earlier this month, The Kraken Collective, and while that was by no means intentional, all the members are ace-spectrum. So definitely keep an eye out on Lyssa Chiavari, RoAnna Sylver, and B.R. Sanders. They write amazing science-fiction and fantasy, in addition to being thoughtful and awesome people.

Other cool ace spectrum writers include Tiffany Rose, Rachel Sharp, Lynn O’Connacht, Heather Rose Jones, and Kiran Oliver! All of them have at least one book with asexual characters too.

I know of two aromantic writers with #ownvoices books, Lauren Jankowski and Reylin J. Hardy. They both have urban fantasy, so if that’s up your alley, definitely check them out!

Where and when can we get a copy of City of Strife?

Every major online e-book seller with have City of Strife. This means whether you own Kindle, Nook, iPad, or Kobo, you should be able to get it! Amazon exclusivity gives indies a lot of great opportunities, but I really don’t like restricting where I sell and who can get it, even for three months. Paperbacks will be through Createspace, so you can either buy them directly there, or through Amazon. All appropriate links will be on the book’s page, on my website, and you can also add it on Goodreads for now!

Claudie Arseneault is an asexual and aromantic-spectrum writer hailing from the very-French Québec City. Her long studies in biochemistry and immunology often sneak back into her science-fiction, and her love for sprawling casts invariably turns her novels into multi-storylined wonders. The most recent, City of Strife, comes out on February 22, 2017! Claudie is a founding member of The Kraken Collective and is well-known for her involvement in solarpunk, her database of aro and ace characters in speculative fiction, and her unending love of squids. Find out more on her website!

« The Secret Behind My Ratings
Book Review: The Voices of Martyrs by Maurice Broaddus »

2 thoughts on “A Q&A with Claudie Arseneault, author of City of Strife”