//
you're reading...
board game review, board games

Board Game Review: The Resistance 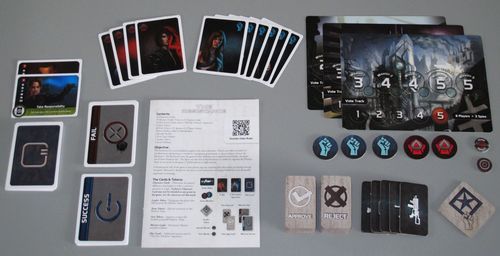 Publisher: Indie Board and Cards

Why review The Resistance?

In the first few rounds of the game, no one really know what is going on besides the spies. Because of the lack of information, the resistance players must make decisions about the first few missions almost at random in order to glean information. Players start accusing other players of being spies based on their first impressions – hesitation in response, ‘shifty eyes’, silence, talking too much, etc. With more information, the resistance can more easily deduce the spies; however, the damage is often done long before. Fellow resistance members might never trust each other through the entire game…

This reminds me of how marginalized communities are often ‘stereotyped’ by what is portrayed in the media and suddenly every person of color is that mold. We do not have information about everyone we see on a daily basis so we use what we do know and what we have seen in order to categorize and make sense of a situation – this is a human thing. Much like The Resistance, these pre-judgments can lead to preemptive accusations and arguments about different hot button issues (access to resources, police brutality, representation in positions of power, etc.), often ending in intense conflicts. Not all marginalized folks fit the common stereotypes floating around our culture; however, the mere perception that these ‘spies’ (sterotypes) exist everywhere cause blatant instances of oppression of a marginalized group.

This game is also very accessible to anyone – even non-gamers. Most of the folks I have met have played some version of Mafia and are quick to understand the premise of The Resistance. Just earlier this week, I moderated a couple of games with a group of student leaders I work with. All of them have played Mafia before and quickly jumped into the gameplay. Like most groups I introduce the game to, they were captivated by the social interaction and the tension of missions. Alliances were formed, players were backstabbed, and at the end of two games, the Spies and The Resistance each won one!

Overall, I very much enjoy the game and would rarely turn down a quick round of The Resistance! My rating remains relatively unchanged after a year and a half and I can see it staying around a ~7-8 out of 10 for a long while. Many social education games have flooded the market recently, but I believe The Resistance remains one of the classics in that genre. I would highly recommend this game!

In general the component quality is good. But like any game with secret roles, the role cards need to be pristine in order to save the integrity of the game. I have sleeved my role cards to prevent damage. One Night Ultimate Werewolf is another deduction game with secret roles that uses tiles for the roles. Although they are hard to shuffle, they are a little more durable than the cards. Other than that, the board and the tokens (which are cardboard) are very good quality and a good value for the price point.

When I teach the game, the theme comes through loud and clear. It is easy to get new players into the game by explaining the mechanics in terms of the theme. For the first few games, I think the theme was felt amongst my group. However, when my usual group plays, The Resistance is relatively themeless. We know our goals and we know we have to weed out the spies of gain the trust of the resistance. Nothing less and nothing more… I give it 1/2 because I really really like the theme. I wish it was a bit stronger after many plays. I guess that is more on the players than on the game.

I really enjoy the no elimination aspect of this game. When I first heard about The Resistance, it was described to me as Mafia without elimination. I do enjoy a round of Mafia but I am disappointed when I am eliminated in the first few rounds. I think this game takes everything good about Mafia, simplifies it, and allows everyone to play the entire game.

The mechanics are very simple and when first explained actually sounds pretty lame… One player selects a mission party, then there’s a vote, then the mission party decides whether they pass of fail the mission. BUT the amount of tension and anxiety The Resistance creates is phenomenal!

Every time I have played The Resistance, I have been fully engaged until the very end… flipping over that last mission card which determines who wins! I can see those who are inclined to play social dedication games or for folks who do not like bluffing or lying to become disengaged. For me, I think this can captivate a gaming group and one of the (in my opinion) perfect games to start a night of gaming or to end a night of gaming. The Resistance can play up to ten and a good touch point for gaming groups who have split up for the entire night.

I have to be in the right mood to play The Resistance – one that allows me to be completely involved in a social game. And to tell you the truth, I am not always up for it. The Resistance also depends on the group of people who plays. If one or two people are not into the social aspect or bluffing, the game falls flat, particularly if that person is one of the spies. When I do play, I generally have fun and will always bring it to group meetups!

2 thoughts on “Board Game Review: The Resistance”