//
you're reading...
board game review, board games

Board Game Review: Journeys of Paul

Journeys of Paul is a competitive board game where players are trying to establish churches around the Roman Empire before ending their journey at Rome. On a players turn, they are able to pick an action to complete, but beware! A crafty event deck full of set backs will make the task of establishing churches more challenging. From bad weather, to heresy in the region, Paul did not have the ease of influencing cities in the Roman Empire. Christian themed and spirituality themed games are hard to come by and usually they fall short of expectations… so the big question here… Is this a good game?

Why review Journeys of Paul?

I find spirituality to be an identity that is rarely talked about openly between people of varying faiths, beliefs, religions, and spiritualties. I wonder, why is that? Maybe, since spirituality is an invisible identity, folks do not know how to strike up a conversation without visual cues or visual recognition. I agree an absent of visual cues contributes to the lack of acknowledgement and dialogue; however, I believe there is a deeper root issue. I see a fundamental difference in people who hold different beliefs – for example, when it comes to ethnicity as an identity, I identify as Japanese. Through my lens of ethnicity, I experience the world, different from others around me. My experiences are true for me and me only, since I make meaning in my life through the unique intersections of my identities. For my spiritual beliefs, I also experience the world different from others. The major distinction between spirituality and other identities is the idea of universal truth. My spirituality is not only true for me, it is true universally regardless of the beliefs of others.

Wow! That is huge! And to me, universal truth is one of the main barriers to interfaith dialogues and coalitions. How can two different ideas about the same thing be universally true at the same time? Well, this is not a post about interfaith relationships – that may come later. I want to review Journeys of Paul and other games with modern spiritual themes in order to discuss the use of religion and other spiritualties as theme for games. Are they educational? Do they appropriate culture for profit? What themes are being published (Christian vs Islam vs Eastern religions vs atheism vs. others…)? Would themes of other religions/spiritualties be accepted? Can players of other faiths/beliefs play a religious/spiritual themed game? Do they want to? Well… Let’s get to it!

Still looking for a Christian themed game with strong game mechanics and fun gameplay. To me, it seems like there was little going on in the development and playtesting process. I did not find a game a enjoyed… and the event deck seemed very random with minor ways to mitigate the negative events. I think this could have been a good game and the theme could make for a cooperative game; however, Journeys of Paul fell flat for me.

I have the boxed version and the box quality is terrible. I understand why Cactus went to a tubed version of the game. If you choose to get this game, I would recommend the tubed version. The board is well illustrated and is of very good quality. I think my board warped a bit, but no more than any other board I have had. The cards are pretty good quality but I could see getting worn down easily.

The player/boat markers and the chits to indicate the sects, churches, and bishops were of low quality. They were functional, but the publisher could have made the game more appealing to the eye. One suggesting I would have is using wooden cubes for the sects, a shepherd meeples for the player, and a priest meeples for the bishops. I understand about production costs and the price point of the game. For the amount Cactus was looking at in terms of budget, the cardboard chits were probably the most realistic.

Finally, the insert was worthless. A custom insert needs to be made or you should bag all the components.

I was really excited about this theme! I thought it could lead to a very clever area control game and negation for the blessing cards. The Journeys of Paul throughout the Roman Empire and ultimately his incarceration and death are the a large part the New Testament and of great importance to the Christian faith. Disregarding the spiritual theme, this also is a game about a historical time period in the Roman Empire where Christians were persecuted for their faith as they were trying to establish churches and worship freely. The parallels to our modern world are unmatched. I think this could be a tool not only to teach about about historical Christianity but it can be a tool to open up a conversation about religious/spiritual persecution in the modern day US. To add to the theme, each card has flavor text and Bible versus that support the events. The instructions also have information and history on the actual path that Paul took on his way to Rome.

The one aspect I did not like about the theme was the event that triggers the end game. Paul was ultimately going to Rome, but the game fails to acknowledge what happened to Paul when he entered Rome. Although not the most positive events of Paul’s life, when I played and I won the game, I did not entirely feel like I won when I arrived in Rome. Also, building churches and spreading the scripture sounds like a cooperative effort to me. I think this might have done better as a coop game.

I heard from a couple of gamers who do not subscribe to a particular faith or subscribe to a different faith, they see a religious/spiritual theme as just another theme – such as space exploration, farming, or city building. I understand where they are coming from and I cannot help thinking those ideas can be used to devalue any identity, culture, or faith.

When I first read the rules, I thought there might be some clever area control aspects to the game. Players are vying for control of different cities by building sects that eventually become a church. I found out this was not the case.

First, there are three actions (actually two) a player can take during their turn: 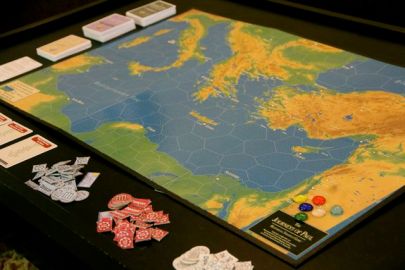 Really, the two move actions are the same actions, but the move by sea action, a player must have a boat card. So… a player has two choices and the choice is pretty obvious. If a player is at a city, they will choose to build a church. If a player is not, they will choose to move towards a city. Then comes the event deck… The current player draws the top card and reads the event. The event either
prevents the player from doing one of the three actions or does nothing. Players may be able to mitigate the effects of the event by playing an appropriate blessing card.

Second, the hand management aspect of the game is just as random as the event deck. A player has no premonition about what event might happen on their turn. When a player has to discard down to the hand limit, they are guessing at what cards they might need for a future event.

Finally, the area control aspect I expected to be the crux of the game play was nonexistent. Once a player starts building a church in a city, it is almost impossible to beat them to building a church or force their sects/church out of the city. You may get lucky if they pull an event card, which makes them lose sects in a city, but it is rare. I would like to have more player interaction promoting fighting over cities to establish a church. There might be a variant create to have more player interaction, but I have not looked.

I was engaged until the second turn of the game when I realized, mechanically, I was doing the same thing every single turn. The randomness of the event deck frustrated me… and not in a good way like other games. After a couple of turns, I checked out. Luckily, turns are so short, the 120 minutes game time printed is much longer than I experienced. I say 45 minutes is a good estimate for game length unless you play with six players.

I really wanted to like this game. However, I had absolutely no fun playing this game. There were no choices and I felt like the event deck controlled the whole game with no real mechanics to mitigate the randomness. Also, with no player interaction, I might as well play this one solo… This game is definitely not for me.

I did not enjoy this game; however I realize everyone has their own tastes. If this game (theme, mechanics, etc.) interests you, I encourage you to give it a try. If you like a game and others do not, who cares? The point is you are having fun playing board games.